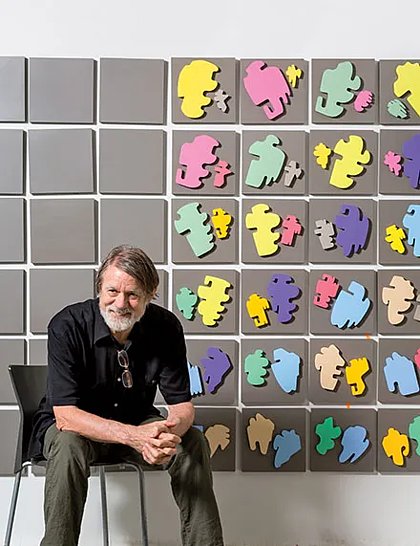 Born in 1944 in Los Angeles, Allan McCollum lives and works in New York. With over a hundred solo shows to his credit, including retrospectives at the Musée d’art moderne of Villeneuve-d’Ascq in France (1998), the Sprengel Museum in Hanover, Germany (1995-1996), London’s Serpentine Gallery (1990), Malmö’s Rooseum Center for Contemporary Art in Sweden (1990), IVAM Centre del Carme in Valencia, Spain (1990), and the Stedelijk Van Abbe Museum in Eindhoven, the Netherlands (1989), he was initially recognized as a minimalist artist before making his mark as one of the principle representatives of the appropriationist movement.

His works is found in important museum collections around the world, including MoMA, the Metropolitan Museum, the Whitney Museum, and the Guggenheim Museum in New York, as well as in the Art Institute of Chicago and MOCA, the Museum of Contemporary Art in Los Angeles.

In Brave New World (1932), the British writer Aldous Huxley imagines a society that uses genetics and cloning to condition and control individuals, a visionary Dantean scenario that raises real ethical questions today. Well before any possible realization of this prediction, Allan McCollum highlighted the interlinking problems posed by reproduction and repetition in his own field of expression, namely the visual arts. Through a body of work that is copious, original, and serial, the American artist raises the question of representation of the work of art while developing a culture of the multiple and the copy. Thus, since the end of the 1970s, he has been engaged in a critical reflection that questions the modes of production, distribution, acquisition, presentation, and reading of a work of art.

To this end, without ever turning to industrial production, he fashions objects that simulate works of art. He makes series of objects that are all similar in appearance, although each differs in color, dimensions, or some formal detail. He casts vases, for example, in plaster (Perfect Vehicles), then sets them up by the thousands in his shows. Taking this concept of parody to the extreme, he tries to “produce more artworks than most museums have in their inventory.” Encouraging collectors to acquire series of works rather than pieces sold individually, he has adopted the attitude of a wholesaler in order to deal with the work of art like any other commercial item, echoing ideas already put forward by Andy Warhol in the 1960s. By endlessly turning out his series, Allan McCollum demystifies the work of art, recognized for its unique, irreplaceable aspect.