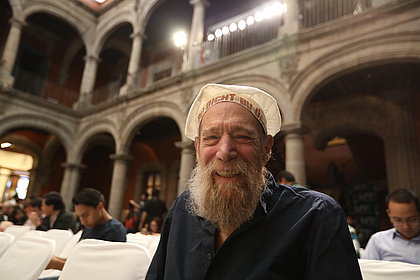 Lawrence Weiner was born in 1942 in the Bronx, New York. In 1968, he exhibited alongside Carl Andre and Robert Barry at Windham College, Putney (Vermont). A year later, in 1969, he took part in the legendary exhibition organised by Harald Szeemann in Bern, When Attitudes Become Form. A major retrospective of his work was shown at MoCA, Los Angeles and the Whitney Museum of American Art, New York, in 2007 – 2008, and then toured Germany.

Weiner has featured several times at Documenta in Kassel and at the Venice Biennale, as well at the São Paulo Bieñal in 2006. His works are on display in the world’s leading museums and in site-specific installations in numerous cities. His many prizes include the 2015 Roswitha Haftmann Prize, Zurich, one of the most prestigious art-world awards. He lives and works in New York.

After doing various jobs, while still in his late teens Weiner began travelling around the United States, Mexico and Canada, in the late 1950s and early 1960s. A self-taught artist, he began showing his art shortly afterwards, causing a stir with works that radically subverted the forms and structures of traditional art. Weiner’s position was that a work of art did not need to exist physically; the spectator could still conceive and elaborate something. In 1969, the year of his participation in the seminal exhibition by Harold Szeemann, When Attitudes Become Form, alongside other emerging figures of the day, all now tutelary figures for later generations, he issued his landmark statement defining his artistic position: “1) The artist may construct the piece. 2) The piece may be fabricated. 3) The piece need not be built. Each being equal and consistent with the intent of the artist, the decision as to condition rests with the receiver upon the occasion of receivership.” His position has had a lasting impact on the art scene.

A pillar of the conceptual art movement, Weiner is a prodigious explorer of the power of words and, presented in his immediately legible and recognisable form, these have become one of the hallmarks of his work. They are rooted in and inspired by the wall writings he grew up with in the streets of his neighbourhood in New York. This emphasis on words became a dominant feature of the artist’s work after 1970, as he explored their potential through different media and on every scale, notably in books, videos and on the walls of buildings or along city streets.

His inscriptions wield the same power as sculpture, occupying space in an impressive fashion. Weiner believes that words can have a real impact on viewers, providing they are simply aware and receptive; that they can then serve the construction of an image or an effect. The choice and size of the typography, the articulation of the words, the occupation of space, the rhythms laid out, the dynamic thus created and the colours used in these artist’s statements compose captivating and powerful visual landscapes.

Lawrence Weiner describes language and its referents as his preferred medium. For him, the dematerialised artwork offers unlimited freedom and can be widely accessible: because it calls on the imagination, each person can form their own idea of art. In his practice, and in the theory that he has formulated, Weiner is one of the most important and most in-demand of contemporary artists. His decisive art can be found in the most prestigious museums and collections, including the Guggenheim and MoMA in New York, Tate Modern in London and MACBA in Barcelona, which holds a variant of the work here. A unique art world figure, Weiner and his unwavering visual approach still constitute a major reference for younger artists today.

Language + the materials referred to No. 6840
Variable dimensions