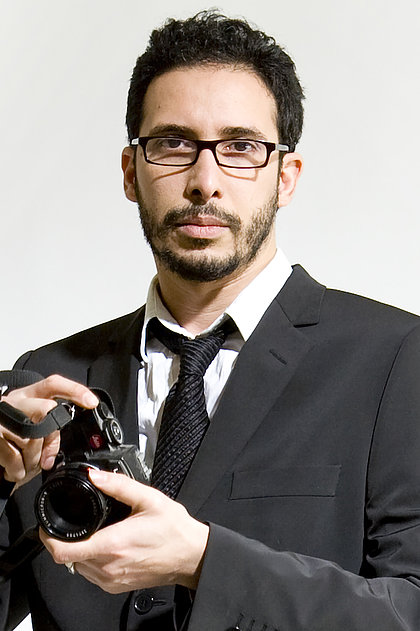 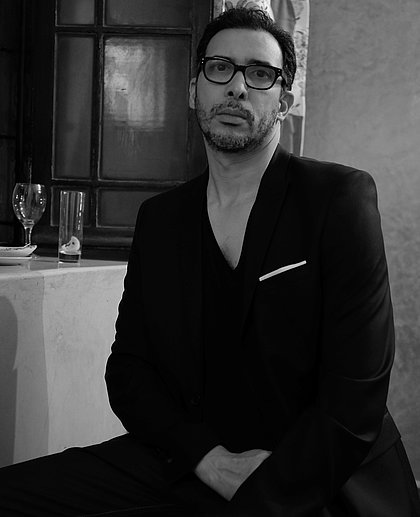 Mounir Fatmi was born in Tangier, Morocco in 1970. He moved to the city of Casablanca when still a toddler. He studied at the School of Fine Arts in Casablanca and later moved to Italy to study at the Fine Arts Academy in Rome. His work has been shown in numerous solo exhibitions across Europe and the Mediterranean.

His installations have been selected for well-known artistic events, including the 52nd 54th and 57th Venice Biennale, part of the first pan-Arab exhibition The Future of a Promise, the 5th Gwangju Biennale and the 10th Lyon Biennale, the 10th and 11th African Biennale of Photography in Bamako and the 7th and 13th Dakar Biennale. He was awarded the Cairo Biennale Prize in 2010 and was shortlisted for the Jameel Prize of the Victoria & Albert Museum, London, in 2013. He now works and lives between Paris, Lille and Tangier.

Mounir Fatmi works extensively with the superposition of language to images, constructing literary spaces and visual games. History, identity, the body, the exile are some of the recurrent themes in his body of work, which range from the desecration of religious objects to the deconstruction of dogmas and the end of ideologies. He is interested in the machine and in the idea of the death of consumer goods, whether they are VHS tapes, photocopiers, antennas or political movements. His videos and installations reveal our fears, our desires, our doubts. They point a finger to the state of the world by offering a different angle of view displaced just outside of conventions.

Mounir Fatmi’s work is influenced by world events as well as by personal stories. After the 9/11 attacks, he produced a series of installations titled Save Manhattan and exhibited The Lost Spring in direct reaction to the Arab Spring events.

His exhibition titled Permanent Exiles at MAMCO in Geneva in 2015 dealt with his own exile from Morocco and the issues of separation and fracture.

Casablanca, city of his childhood memories, meets the legendary film Casablanca in an important series of images and videos titled the Casablanca Circles which brings together all of Mounir Fatmi’s preoccupations. Various diagrams of circles and lines annotated with numbers and letters are superimposed over a selection of stills from the famous scene of the kiss between Humphrey Bogart and Ingrid Bergman. These geometrical sketches were inspired by radiochemist and Nobel winner Frederick Soddy’s poem The Kissing Precise (1936) which, according to Descartes’s theorem, interprets in rhymes the point of tangency where four circles meet as a kiss. Fatmi further explains how his obsessions with poetry and mastery, a Nobel Prize chemist, the geometry of feelings, and the recent event of two young Moroccans’ love demonstrated by a kiss in public, the Nador kiss, which created a tumult, are interconnected with a Hollywood kiss and the film of his childhood: “All is desire, all is poetry, all is science, all is art and ultimately all is politics.” The image always contains more than it reveals.