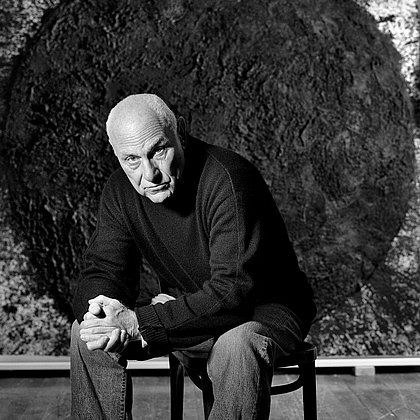 Richard Serra was born in 1938 in San Francisco. He first studied English literature while working in the steel mills to support himself, and later obtained his MFA in painting from Yale University, New Haven in 1964. During the late 1960s, he travelled to Paris and Florence, across southern Europe and northern Africa on several fellowships. He was given his first solo exhibition at Galleria La Salita in Rome in 1966 and in the United States in 1969 at the Leo Castelli Gallery in New York, where his circle of friends included Carl Andre, Walter De Maria, Eva Hesse, Sol LeWitt and Robert Smithson. His first solo museum exhibition was held at Pasadena Art Museum in 1970.

In 1997, his Torqued Ellipses were acquired and exhibited at the Dia Center for the Arts, New York. In 2005, eight major works were installed permanently at new Guggenheim Museum, Bilbao and in 2007, the Museum of Modern Art in New York mounted a major retrospective of his work. Richard Serra has participated in several Documenta exhibitions as well as Venice Biennales, and has exhibited around the world in the most prestigious venues. He lives in New York and Nova Scotia.

Serra is widely considered as one of the most influential sculptors of the late 20th century. He has produced large-scale, site-specific steel sculptures for architectural, urban and landscape settings across the entire globe. His work has played a major role in advancing the tradition of modern abstract sculpture in the aftermath of minimalism, as it drew new, widespread attention to sculpture's potential for offering viewers both a physical and visual experience. His monumental arcs, spirals and ellipses engage the viewer in an altered experience of space.

A modern Renaissance man with a forceful personality, Serra's interest in painting, sculpture, music, dance, film, performance and installation art has affected legions of artists during his long career. As Tilted Arc, a gently curved, 3.5 metre high arc of rusting mild steel installed in 1981 on Federal Plaza in New York demonstrated, Serra's work has been difficult to ignore and has brought the discourse about public art to the critical forefront.

In 1966, Serra made his first sculptures out of non-traditional materials such as fibreglass and rubber. From 1968 to 1970, he executed a series of Splash pieces in which molten lead was splashed or cast into the junctures between floor and wall. By 1969, he had begun the Prop pieces, whose parts are not welded together or otherwise attached but balance solely using the forces of weight and gravity. He produced the first of his numerous short films in 1968, and in the early 1970s, experimented with video. Since 1971, Serra has made large-scale drawings, using first ink, charcoal and lithographic crayon on paper, and later mainly using the paint stick, a wax-like grease crayon. His drawings are not preparatory studies but – surprisingly – produced after a sculpture has been completed, as a form of notation of its spatial relationships. As such, they stand as autonomous artworks.