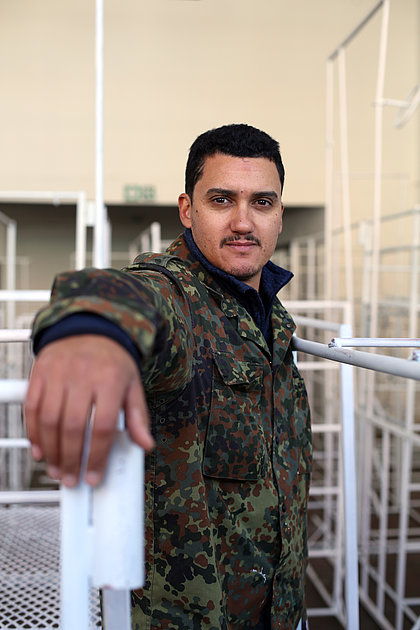 Born in 1976 in Cape Town, South Africa, where apartheid was still in force, Robin Rhode today lives and works in Berlin in a large studio that allows him to freely develop his choreographed artworks. This artist-acrobat began his art studies at the Technikon Witwatersrand (now known as the University of Johannesburg), in South Africa, then went on to study at the South African School of Motion Picture Medium and Live Performance. He was selected for several residencies in the United States (Minneapolis, Boston), London, Berlin, and Cape Town, in his native country, and has been awarded several prizes, including the Roy R. Neuberger Exhibition Prize New York (2014), the Young Artist Award, A.T. Kearney in Germany (2011), the Illy Prize Art Brussels (2007), and most recently the Zurich Art Prize (2018).

In 2007, an important showing of his work was mounted at the Haus der Kunst in Munich, accompanied by the first publication dedicated entirely to his output, Walk Off (Hatje Cantz). He now exhibits around the world, from Los Angeles (LACMA) to Turin (Castello di Rivoli), to Melbourne (National Gallery of Victoria). His works have been collected by a number of important institutions, including MoMA in New York and the Pompidou, the Louis Vuitton Foundation, and the Musée d’art moderne in Paris.

Robin Rhode’s work occupies a place somewhere between street dance and the pioneering photographers of the second half of the 19th century – Étienne-Jules Marey and Eadward Muybridge – who brought to light the mechanisms of movement that had been difficult to observe until that point, either by decomposing each fraction of a movement, or by rendering the fractions in a single image. Thanks to a synthesis of the observed movement – impossible to catch with the naked eye, whose retinal abilities are limited – Rhode’s works break down movement into a ballet of possible forms and combinations.

The successions of his photographs juxtapose the dancer’s positions while at the same time on a wall in Berlin or Johannesburg the gradual realization of a chalk or pastel drawing plays out. Thus a story is told, a story in three dimensions that include time. Versatile and deeply influenced by popular street culture and the emergence of hip-hop and street art after apartheid, Rhode stages his own movements in his performances, deliberating concealing his face beneath a black stocking in order to neutralize any question of race. The motifs of his most recent wall paintings reference modernism and constructivism while incorporating notions of color theory.