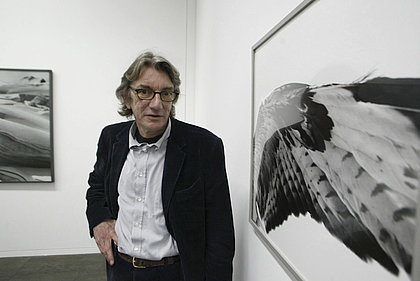 Born in Bern in 1944, Balthasar Burkhard was an internationally-renowned Swiss photographer. During his apprenticeship, he studied photography with Kurt Blum, acclaimed for his reportages for the illustrated press as well as for his experimental artistic works. In 1965, Burkhard opened his own studio and worked closely with the curator Harald Szeemann as a documentary photographer for the Kunsthalle in Bern. He portrayed numerous artists and developed a taste for contemporary art. He received international attention in 1969 with the exhibition of large-format photographs on canvas that he produced with the artist Markus Raetz. He moved to the USA and was appointed visiting lecturer of photography at the University of Illinois in Chicago from 1976 to 1978.

He returned to Switzerland in 1982 and continued to collaborate with other artists and exhibit his work widely. He moved to France for a few years and taught at the Fine Arts School in Nimes from 1990 to 1992. In 1995, Burkhard returned to Switzerland, travelling only to realise his ambitious projects. He died in Bern in 2010. Between 2017 and 2018, he had a major retrospective touring the Museum Folkwang in Essen, the Fotostiftung Schweiz and the Fotomuseum in Winterthur, and the Museo d’arte della Svizzera italiana in Lugano.

Balthasar Burkhard worked exclusively in large-format black and white photographic series. His favourite and recurrent themes were the human figure and the nude, represented in distinct series of body parts, as well as animals, flowers, landscapes and cityscapes. In his photographs, he used great depth of field, providing a uniform focus throughout the image and thus revealing every single detail and bringing the entire content of the image to the surface. This gives an impression of density and acute presence that adds to the printed canvases’ effect of monumentality. He was always involved in the manual production of his large prints, monitoring the process at every stage to ensure that his intentions were accomplished. As a result, the subject is of less significance than the actual image he creates from it. Burkhard photographed only things that moved him, with a precise idea in mind and the desire to represent them beforehand.

In the early 1980s, he combined monochromatic colour plates to his black and white photographs, accentuating the grain of the images and the abstract qualities of their subjects. In 1984 and 1987, he travelled to Japan where he was inspired by the aesthetics there and the writings of Tanizaki on the importance of shadows. He brought back extraordinary images of geishas, temples and gardens. In the 1990s, his work focused on a series of animals depicted like statues in profile, immobile in front of a large tarpaulin. Perhaps the images produced during the last decade of his life were the most spectacular, but they, too, were born of exactly the same meticulous craftsmanship and straightforwardness. He turned his camera to the vastness of cities such as Mexico, the nightscapes of Chicago, the desert of Namibia, the cloud formations over Rio de Janeiro and the high mountain range of the Eastern Alps. It was only shortly before his death that Burkhard surprised his audience with a final series of smaller-format colour rotogravures of bright flowers set against a deep black background that were reminiscent of vanitas still-life paintings.