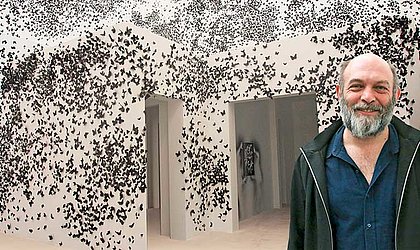 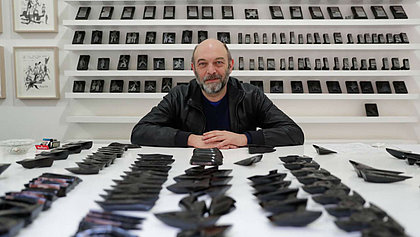 Born in 1970 in Mexico City, Carlos Amorales works across a range of mediums (video, installation, photography, performance) and has gradually built up an international reputation. He has had a number of important solo exhibitions around the world, notably in Mexico City, Manchester, Kassel, Murcia, Philadelphia, New York and, most recently, Amsterdam (Stedelijk Museum, 2020). After training at the Gerrit Rietveld Academie and Rijksakademie in Amsterdam during the 1990s, he returned to his hometown in 2004 and set up a studio with young designers there.

Since 1998, he has been developing a visual vocabulary, a database that he calls his “Liquid Archives”, made up mainly of images taken from the press and the Internet, ranging from nature to people, including accidents, urban violence, terrorist acts and ecological disasters. Listed and stored in the form of vector drawings, they are used to make two-or three-dimensional works and offer infinite resources for generating compositions, which are always possible to reorganize in any way he sees fit.

Amorales’ “Liquid Archives” can be divided up into different categories. One covers drawing and the meaning of letters. The artist is developing an alphabet of new signs, although it is impossible to say which documents in his archives these may derive from. This typographic creation is thus much closer to a code than an alphabet because its meaning does not result from its forms. This work reflects the artist’s interest in questioning the meaning of words, in creating an encounter between high and low culture, and sometimes in using codes as a tool for making political or social points. For example, he says that these signs could constitute the language of the people in his country who have been killed.

To take the experiment further in this direction, he has even carried out transpositions: “I created a book in which an existing text by Roberto Bolaño is printed in this incomprehensible script; it’s not a translation but a cryptic codification.” ABECEDARIO VERSIÓN 2 is an alphabet resulting from the artist’s typographic researches. Each letter has its own canvas, on which it is broadly brushed in black, with lines tapering into increasingly fine ends. In this way, Amorales pushes back the limits of language and takes it to the shores of visual experiment, as if to remind us that all writing involves imagistic phrases that are sometimes constituted by symbols, before it can be distilled into abstract signs.