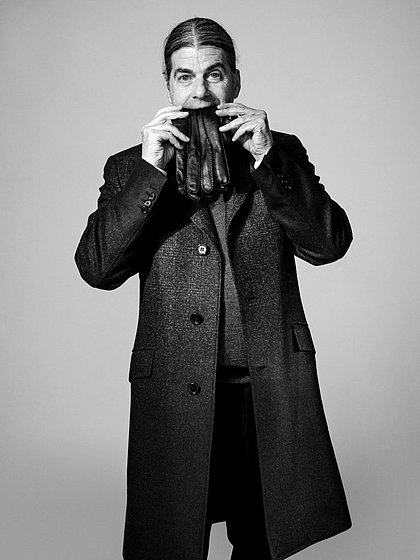 John M Armleder is an internationally renowned figure and one of the most influential artists on the Swiss scene. Born in Geneva in 1948, he enrolled at the city’s École des Beaux-Arts and went on to found the Écart group with Patrick Lucchini and Claude Rychner in 1969. Close to the concerns of the Fluxus movement, Écart refused to acknowledge any barrier between art and life and was at the center of one of the most important alternative spaces in Europe in the 1970s, creating a gallery, a bookshop and a publishing house for artist’s books, all under the same name, in 1972–73. These activities continued for seven consecutive years.

In 1986 Armleder’s standing was consolidated when he was given the Swiss Pavilion at the Venice Biennale. Over the last forty years his works have featured in numerous international exhibitions and biennales (Paris, Venice, Sydney, Lyon, Ljubljana, Busan, Valencia, Shanghai), as well as in PROSPECT in Frankfurt, Documenta IX in Kassel, Toyama Now in Japan and the 1992 world’s fair in Seville. In 2006 Mamco put on a big retrospective of his work titled “Amor Vacui, Horror Vacui” and he has received commissions for several pieces of public art from the State of Geneva (Collège de Drize, 2010, Cornavin railway station, 2018).

Growing out of his collective, multidirectional experiences with Écart, Armleder follows the idea that there is no hierarchy of genres, insisting on the equivalence of materials and adopting chance as a cardinal principle. His works frequently refer to the history of modern art and, since 1980, have interrogated abstraction and the idea of modernity by means of appropriation and quotation. In his approach, everyday objects take on an affective, absurd or decorative character, helping to narrow the supposed gap between art and life.

Armleder’s keen interest in music is expressed in installations involving instruments, which appeal to him “for their relation between acoustic and mechanical necessity and their aesthetic culture”. Batterie is a complete drum kit, “just as it was displayed in a shop”. “I have therefore displaced a decorative object into an exhibition,” he explains. This mute presence also references John Cage, the creator of the silent 4’33’’, and his influence on Armleder’s practice of performance. It can indeed be seen to contain the potential for infinite “scores” of silence. In formal terms finally, this instrument is made up of spheres, that is to say, of circles, a recurring motif in this artist’s practice, as evidenced by the drawing from 1982.