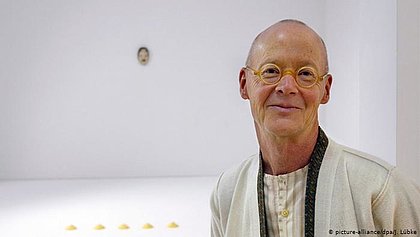 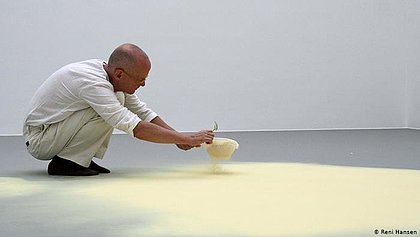 Born in 1950 in Metzingen, Germany, Wolfgang Laib went with his parents to India in 1960 and has had a close connection with the country ever since. In his teenage years, he discovered art – his parents collected work by the minimalists – along with the Tao, Nietzsche, Lao Tzu, and Schopenhauer. He began studying medicine at the University of Tübingen in 1972 when he did his first artwork by sculpting a perfect Brahmanda – inspired by the objects he had seen in India – after stumbling on a black stone in Germany. He decided to become an artist on the spot.

Since then he has arranged his life between his native land (Hochdorf) and India. He exhibited at Documenta 7 and 8, and in 1986 his first major institutional show took place at the Musée d’art moderne de la Ville de Paris. A traveling retrospective of his work toured the United States in the early 2000s, stopping notably at the Hirshhorn Museum in Washington. He was awarded the Arnold-Bode-Preis at the 1987 Documenta and in 2015 the Praemium Imperiale in Tokyo.

“Do I believe in God? I believe in art, which is a way of believing in God.” Very much influenced by the artist-shaman Joseph Beuys and Mario Merz, from whom he borrowed “poor” everyday materials that straddle the cultures of the West and the East, Wolfgang Laib has had the wisdom to let his works speak for themselves. Inspired by Indian sutras and Sufi poems, he conjures up the world in its most modest details, seeking the quintessence of the present moment without weighing himself down with empty talk. “Life is not a question of evolution. It’s a question of essence, not of becoming.” His work is characterized by great simplicity. Immediately identifiable, it repeats the same motifs obsessively, such as cones and rectangles, as well as stylized motifs of houses.

For over thirty years, Laib has also laid out on the floor squares of pollen – he collects the pollen during the long walks he takes – which radiate there; he sculpts Milchsteine (“milk stones”), large blocks of marble filled with milk, and hollows out wax chambers that give off their unmistakable smell and invite the viewer to retreat there. A coming together of the mineral and the organic, the inert and the living. These are many of the leitmotifs that Laib deploys with Zen-like calm, constantly looking to restore a specific connection with nature which, as he sees it, has been altered by science. In his work, the infinitely small is often linked with the infinitely great so as to question our place in the universe.